The 912 that became so famous the patina has been copied as a wrap!

When Stefan saw this 1968 Irish Green Porsche on Ebay he knew he had to rescue it before a true ‘restorer’ got a hold of it. Patina is a favorite look of his and there was no way he was going to let this awesome patina and the story of this 50+ year old car be covered up and lost forever.

The Patina Porsche was all the way over in Tennessee (Stefan was still in the UK at this point). It had been sitting in a field for many many years so the floor was completely rotten, there was no suspension nor any of the undercarriage that could be saved, so much so, that it had to be shipped on a pallet!

The first task though, was to obtain a title before it could be shipped to the UK….

Once in Blighty, Stefan got to work on rebuilding the Patina Porsche from the ground up – whilst retaining the original patina, of course!

This was quite simply, a bare shell. No floors meant no interior, no gauges, no nothing! It was built over the course of two years and gained a lot of love and interest from people all over the world.

Once all the lower metal work was carried out, the interior floor pans and rear seat area were painted Irish green for a minimalist ‘outlaw’ look with a pair of re trimmed 912 seats, Momo steering wheel and Simpson Harnesses. The car sat on all new re-built 911 suspension and rolled on RSR styled Fuchs. Power was provided by an ACE built 2270cc stroker type 4 engine with Porsche 911 cooling and Weber 48 IDA’s backed by a 901 5 speed transmission.

Stefan and the Porsche had a front cover feature in Hayburner magazine and Stefan has since been innocently tagged in images on social media that appear to be his Irish Green Patina Porsche but is in fact, amazingly, an exact wrap copy of the ACE Built patina Porsche! Sadly the Patina Porsche is no longer with us at ACE but is providing beaucoup de joie to it’s new family in France! 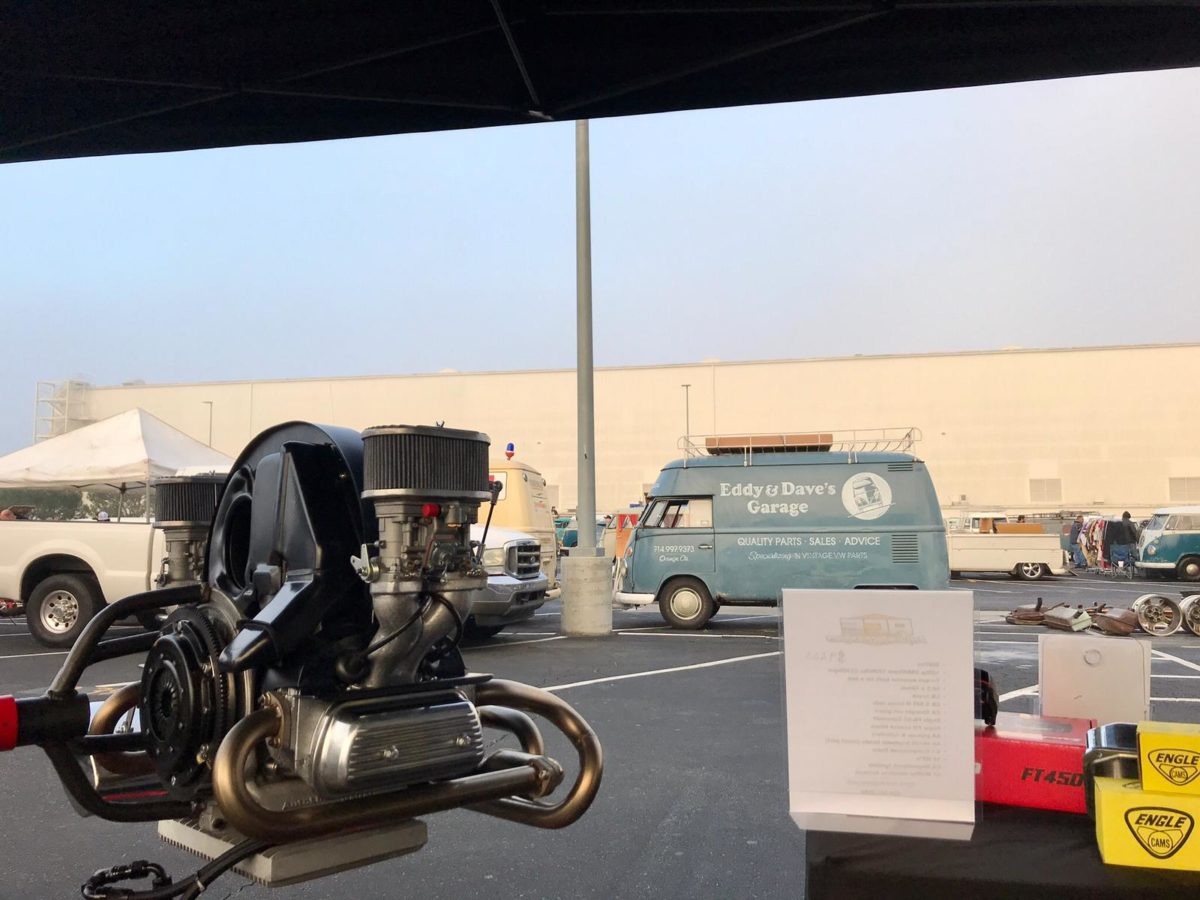 Two days prior to OCTO, we had just finished building the long block of a soon to be Turnkey 2276cc IDA motor and about to crate up a 2007cc Turnkey engine for shipping overseas, and thought rather than just go to OCTO to hang out and find a few bits for our newly acquired 1960 Mango 11-window bus ‘why not take our engines to display?!’

With our bus still on it’s long journey from Nebraska, we loaded the shop truck up instead. Our trusty 1973 Chevy C10 pick-up was making sparks on the freeway with the two air-cooled engines and the high end parts we had to display in the back!

Despite the thick fog and lack of coffee we got our gazebo up and the engines out on display and what a great day we had!

So many amazing buses on show, we met some awesome people, had some great feedback, bought ourselves some steels and Stef even got a pic with Gary Berg!

We are so humbled to have been approached by Greg from Engine Builder Magazine to discuss our latest LS build!

When we spoke to Greg, Adrian’s twin turbo 370 cid LS was on the stand going through the final stages of the build before being shipped out to the UK to be fitted into a neat little street & strip Vauxhall Victor, an English station wagon from 1968.

The engine is made up of an iron block, GM crank, Callies rods, Brian Tooley Racing twin turbo cam, CP-Carrillo pistons, AFR heads and ARP hardware. It’s got twin 62mm turbos with ball bearing and billet wheels and will be powered by Holley Dominator EFI.

The latest ACE news and posts